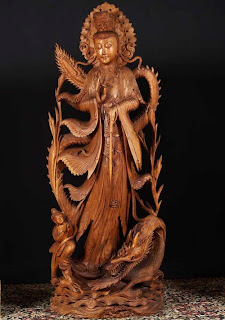 Ratchavadee Resort 2013
I go on holiday to rest and write.
Holidays are one thing and sitting here in paradise waiting for inspiration is another.
The two just don't seem to mix as there are too many distractions.
The beach, the pool,
the food, from one to the other.
Then people want to talk and ask questions
Where are you from?
What are you writing?
Why are you so quiet?
Go away and leave me alone!
I was going to write something profound on this trip and I started the first few hundred words.
I read and reread, but my words seemed empty.
Too many distractions.
On my last day on the beach I had given up and was looking at some
photos of Kuan Yin and attached to one picture was the following story;
You may have heard it before but it needs to be read again as sometimes to be reassured that miracles can happen.
My thanks goes to the beautiful Kuan Yin Facebook page:
"Tess was only eight years old but she understood her mom and dad were talking about her brother's illness.
She knew he was very sick and there was no money to pay for an expensive operation.
They were moving to a small apartment as dad couldn't afford the house  doctors or hospital bills anymore.
Tess heard them say that he wouldn't live without the surgery and no one would loan dad the money and he would die if he didn't have get a miracle.
Mom and dad were both crying.
Tess went to her bedroom and got the special glass jam jar from its hiding place in her cupboard.
She tipped the contents on to the bed and very carefully counted the contents.
She counted them three times as she had to be right and make no mistakes.
Tess put the coins back in the jar and tightened up the lid and placed the jar carefully in her school bag and slipped out the back door.
She walked the few blocks to the corner pharmacy.
Tess waited in line for the man to serve her.
When her turn came the man was really rude
"What do you want" he said sharply
She told him about her brother Andrew and how he had something bad growing in his head and how they had no money for the operation and only a miracle could save him
She asked the man how much does a miracle cost
and she has money and if it is not enough she can get more.
"We don't sell miracles here and I am so sorry I can't help you."
Tess was about to leave with tears welling up in her eyes when a well dressed man bent down and said,
"What sort of operation does your brother need?"
Tess said that she did not know but she had $1:11 and if that was not enough she could get more.
The man was Dr Carlton Armstrong a specialist in neuro-surgery and the pharmacists brother.
He asked Tess to take him to meet her mom and dad and said that $1:11 was the exact amount needed for a miracle.
The operation was a total success
Her mom and dad asked the surgeon how much was the cost and could they pay it in small installments?
He told them to ask Tess and that he had charged her for the operation.
When they asked Tess how she had paid she just smiled
Tess knew miracles cost $1:11
Tess is saving up just in case she is needed again to pay for a miracle"
Thank you to Kuan Yin for this and many other miracles
Metta
Nathan
Sent from my iPhone and
http://www.dharmamaster.com
With love