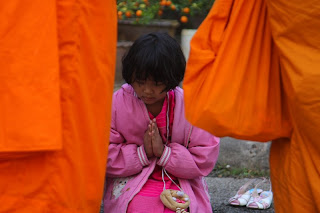 This beautiful child earning merit on Phra Fred and my Alms round
The photo taken by Solo from Beijing
Posted by Nathan Black at 22:22

I decided to do something special for my seventieth year.

I hadn't worked out what to do, for the last year or so, I have not been happy in my skin, and so I should do something about that.
My mind did not seem right.
Every day seemed to be the same.
Outwardly I functioned fine, although, I treated loved ones poorly.
I knew everything was fine and that I was loved and business was increasing, but there seemed to be something missing.

Even with my prayers at the Temple and the Dharma I gave, I was feeling attached to things and I really didn't like how I felt.

So what to do?

I thought maybe it was my diet, too many vegetables, maybe the coffee, too much, not enough.

Maybe exercise, maybe not.
Nothing worked.

Maybe the tablets, so I rang the doctor who suggested a psychiatrist.

I thought of the tattoo I have that says we get love and joy when we just be.

Like the Buddha before Enlightenment.
I was still not happy, not at peace, not home.

I thought I should give more donations, earn more merit, I still felt troubled.

Just before Xmas two monks walked into the shop.
They wore the Theravada forest robes and had shaved eyebrows, so they were from north Thailand.

One asked whether I remembered being in Thailand living in a Wat as a Monk.

I was shocked and said no, but I was planning to go after New Year to visit my son and grandchildren.

They then told me I should go to Fang and learn Dharma and meditation. I was expected.

With that they left.

What an amazing thing to have happen, but then life is amazing once we open our mind and heart to all things.

So I googled Wat and Fang ,which is north of Chiangmai near the Burmese border and there to my surprise were two foreign teaching Monks.

The meditation master Phra Greg and the Dharma master Phra Fred were most welcoming on email.

So I booked and in February spent fourteen days in the Wat in Fang.

I left my home excited not only to see my family but to experience the north of Thailand.

I travel on a Chinese airline as I am going to China after Thailand.
In the waiting area a Monk came and sat behind me.

At Guangzhou airport waiting for a plane, two Monks came and sat opposite me and on the flight a Monk sat in the next row.

From Bangkok to Udon Thani a Monk travelled two rows back.

I thought this is strange, there are around seven billion people on this planet and only so many Monks and only one of me.

Of course on the flight from Udon to Chiangmai there must be a Monk and as I waited for the flight there was an old Monk asleep as they announced the flight.

I gently woke him and he held out his arm for my support and I helped him on the flight where he sat next to me.

Fortunately he was going on the same flight.
I don't believe in coincidence.
I was guarded and guided all the way.

I decided to take the vows and with the Abbot Bhante Dr Apisit's permission and helped through the eight precepts by Phra Greg minus my eyebrows I became a Samanera Monk.

This was an experience of a lifetime.

And so the teaching began with the same practice as taught by the Buddha two thousand five hundred years ago.

The Buddha gained enlightenment by using Vipassana techniques.
He taught his Monks the same meditation and by constant practice some were able to reach the first stage of release from the prison we live in.

As a Monk I started the practice.

Very early during meditation I realized to "let go" is to actually know that all is within us and there is no other and that everything is a product of our senses.

These can fool us to thinking that there is an else (as in something else, someone else).
Of course we then get to rely and trust on this other else and blame shame and punish when it, or they, go wrong.

When we "get it" our compassion level increases, we become aware that we live in the present moment and our life is a pleasure, without the pain of suffering.
All ego and attachment gone.

We tend to hold on to our old habits and refuse to let go, no matter how much suffering we go through and cause suffering to ourselves and others.

Tension builds, buttock tightens, shoulder aches ,head hurts.
How can we be in the moment when our senses are controlling us?

So the practice begins and we sit with eyes open.
Comfortable and relaxed with our hands in our lap, one palm on other.
The tongue just touching the roof of the mouth, lips just together,
We breath through the nose.

This is exactly what I was missing.
This removed totally all the misgiving and helpless hopeless thoughts I had been having.

Then there was the morning Alms round starting at six am.
Every day Phra Fred and I walked barefoot for some four kms collecting Alms from the devoted Sangha.
The poorest of the poor would remove their shoes and kneel in the dirt and place some rice, or small bag of food, or a 20baht note in my bowl and receive a blessing.

This happened every day and the same people gave.
Some of them carried a small bottle of water and as we recited the prayer of thanks they would pour the water on the ground to help the ancestors gain a better rebirth.

I lost my ego.
Attachments fell off me like water off a duck’s back.
No bad thoughts stuck in my head.
No judgmental thinking.
No ill will towards myself or others.

Seeing oneself
acting speaking
and thinking is called
"seeing me".

To "see" the thoughts and become the watcher suddenly put me in charge.

At last my mind was not in charge.
Thoughts rampant like a wild dog.
At last peace and the space between the thoughts becoming longer.

At the morning chanting I watched spellbound as my Dharma Master sat and moved his hands and arms in a slow rhythm.
First his hands placed palm down on his knees.
He then slowly turned his right hand so that the thumb was pointing up and he then lifted his hand some thirty cms straight up and slowly moved it across to his chest and down to his navel.
All this was done in slow motion.
He then repeated the same movement with his left hand and arm and then the right again.
In all sixteen hand movements repeated over and over.
Whilst I watched my scalp relaxed, I felt the tension leave my body just watching him.

He told me later that his Master taught this method and that it had been handed down to him from his Master and so on.
This was a form of Vipassana he said he favored.
He then kindly gave me two books to read.
One from his teacher and the other from his teachers teacher
Both books,
Both Masters are an example of the dedication some have to making each person they touch better for having met them.

I sincerely thank
Pramaha Dr Apisit Pingchaiyawat
Phra Greg Chuntawongso
Phra Fred Blandford
All three for being exemplary Buddhist teachers.
May they be guarded and guided.

Now there is nothing to do other than the practice.